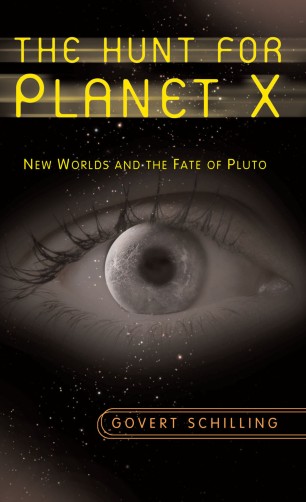 The Hunt for Planet X

New Worlds and the Fate of Pluto

"The Hunt for Planet X is a fascinating tale by one of the world's premier astronomy writers. Govert Schilling is not only scrupulously accurate, he writes beautifully as well."
Stephen P. Maran, Author of "Astronomy for Dummies" and Press Officer, American Astronomical Society

"The Hunt for Planet X is an adventure story or, more accurately, a series of adventure stories. Schilling tells them well, capturing both the science and the people involved. It starts with the classics: Uranus, Neptune and Pluto; and moves all over the solar system as ground-based astronomers and space scientists pour over measurements and observations to try to understand the worlds around us. Current debates about the Pioneer Anomaly and the definition of what is a planet make the book current as well as a good history."
Dr. Louis Friedman, Executive Director, The Planetary Society

"This exciting tale of the centuries-old search for new planets in the solar system reads like a thriller. It is an adventure packed with fierce competition, brilliant discoveries, dumb errors, lucky coincidences and artful intrigue – in short, the full spectrum of the human drama. The story reaches an exciting climax in 2006, when we lost Pluto as a planet but gained a number of ice dwarfs in return. This colorful account chock-full of fascinating details is an excellent metaphor for the great adventure of science."
Robbert Dijkgraaf, Professor of Mathematical Physics at the University of Amsterdam

The Hunt for Planet X: New Worlds and the Fate of Pluto goes beyond a standard scientific read, encompassing who, and what, is involved in the pursuit of planetary endeavors. Touching on over three-hundred years of debates, debacles and discoveries, this book offers the reader insight into the minds and motives of planetary astronomers and their findings. The "hunt" continues to the outer-most regions of the solar system, and Govert Schilling states this search will not cease: "Astronomy is an adventurous science," he writes, and without adventure and those who seek it out the universe would otherwise remain mysterious. The real-life characters presented in The Hunt for Planet X look for glimpses of light in the dark, from icy Kuiper Belt objects to full-fledged planets, in the process challenging how such worlds should be defined and ultimately describing the Universe.