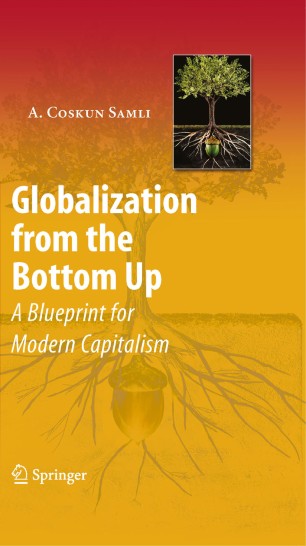 Globalization from the Bottom Up

A Blueprint for Modern Capitalism

There is no doubt that the wheels of globalization are inexorably turning. Pundits on both sides of the fence argue that its forces are either creating greater opportunity for every citizen of the planet or driving a deeper wedge between the haves and the have-nots. In Globalization from the Bottom Up, Josh Samli argues that concentration of wealth is not sustainable; the world-wide financial and economic crisis that began in 2008 is a clear example of the impact of excess. This accumulation of wealth—and the political influence that it bestows—is what Samli calls the "greed factor"; left unchecked and unguided, it could spell economic, environmental, and cultural disaster. While acknowledging that power will continue to be concentrated at the top level of the pyramid, Samli offers an alternative model, a philosophy and practice of "social capitalism" that is grounded in a bottom-up approach to wealth creation. Drawing from examples around the world, Samli argues that wherever the entrepreneurial spirit is tapped, financial, social, and political change will inevitably take place, as other actors in the system recognize opportunities to reap the benefits (for example, through the creation of more consumers and collection of more taxes). Institutions and infrastructure designed to create more entrepreneurs may well be the key to emerging from the current crisis and setting the stage for a more diverse, inclusive global economy. Making the direct links among entrepreneurship, economic development, environmental protection, and political freedom, and offering practical recommendations for enlarging the pie, rather than slicing it into smaller pieces, Samli presents a provocative, and ultimately hopeful, view of a more inclusive, wealthier, and sustainable future.