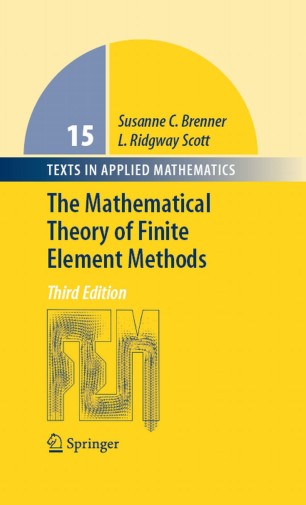 This book develops the basic mathematical theory of the finite element  method, the most widely used technique for engineering design and analysis.

- mixed methods with applications to elasticity and fluid mechanics

- error estimates in the maximum norm with applications to nonlinear problems

The book has proved useful to mathematicians as well as engineers and  physical scientists. It can be used for a course that provides an  introduction to basic functional analysis, approximation theory and  numerical analysis, while building upon and applying basic techniques of real variable theory. It can also be used for courses that emphasize physical applications or algorithmic efficiency.

Reviews of earlier editions: "This book represents an important contribution to the mathematical literature of finite elements. It is both a well-done text and a good reference." (Mathematical Reviews, 1995)

"This is an excellent, though demanding, introduction to key mathematical topics in the finite element method, and at the same time a valuable reference and source for workers in the area."