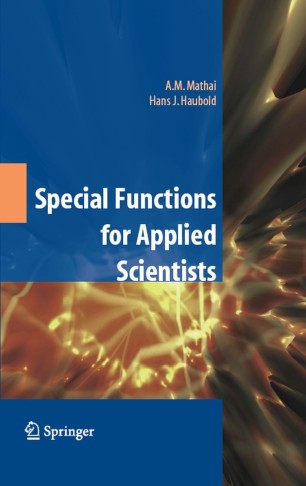 Special Functions for Applied Scientists provides the required mathematical tools for researchers active in the physical sciences. The book presents a full suit of elementary functions for scholars at the PhD level and covers a wide-array of topics and begins by introducing elementary classical special functions. From there, differential equations and some applications into statistical distribution theory are examined.

The latter half of this volume presents applications into stochastic processes, random variables, Mittag-Leffler processes, density estimation, order statistics, and problems in astrophysics.

Professor Dr. Hans J. Haubold is an astrophysicist and chief scientist at the Office of Outer Space Affairs of the United Nations.

Arakaparampil Mathai Mathai was born in Arakulam in the Idukki district of Kerala, India. He is the eldest son of Aley and Arakaparampil Mathai. He completed his High School education in 1953 with record marks in St. Thomas High School, Palai. He then entered St. Thomas College in Palai, obtained his B.Sc. degree in Mathematics in 1957 and went to the University of Kerala, Trivandrum, where he completed his M.Sc. degree in Statistics in 1959 with first class, first rank and a golden medal. He joined St. Thomas College as a lecturer from 1959 to 1961. In 1961, he was awarded a Canadian Commonwealth Scholarship and went to the University of Toronto were he completed an M.A. and a Ph.D. in Mathematics and Mathematical Statistics in only three years, the minimum required time. He then joined McGill University in Montreal - one of the most prestigious universities in Canada - where he was Assistant Professor of Mathematics and Statistics, 1964-1968, Associate Professor, 1968-1978, and Full Professor, 1979-2000. Since 2000, he is Emeritus Professor in Mathematics and Statistics at McGill University, Montreal, Canada. He served and is currently serving on editorial boards of a number of journals and he has supervised over 30 Master's students and 5 Ph.D. students. Currently he is the Director of the Centre for Mathematical Sciences, Trivandrum and Pala Campuses, Kerala, India which he is developing into an national, regional, and international centre of research in the mathematical sciences. The holding of five six-week SERC Schools in 1995, 2000, 2005, 2006, and 2007 are a testament of highest achievements in teaching and research in the mathematical sciences for the Centre.

A.M. Mathai is a Fellow of the National Academy of Sciences, India, and a Fellow of the Institute of Mathematical Statistics, United States of America. He is an Elected Member of the International Statistical Institute, The Netherlands. He is the Founder of the Canadian Journal of Statistics, Canada, and the Founder of the Statistical Science Association of Canda (now, Statistical Society of Canada). Professor Mathai is a Honorary Member of the Organizing Committee of the United Nations/European Space Agency/National Aeronautics and Space Administration of the United States of America Workshops on basic space science which have been held, since 1991, in India, Costa Rica, Colombia, Nigeria, Egypt, Sri Lanka, Germany, Honduras, Jordan, France, Mauritius, Argentina, China, United Arab Emirates, India, and Japan. Professor Mathai is author or co-author of thirteen research level books, seven undergraduate-graduate level books, and more than thirty edited and co-edited proceedings. More than 250 published research papers in journals from around the world are showing the breadth of the array of topics that he has tackled as well as the depth, the complexity and the originality of his published results put him in a class all his own. All these publications concern A.M. Mathai's research areas with significant research contributions in mathematial statistics, applied statistics, probability, astrophysics, information theory, mathematics, and specific problems in biological models, orthogonal polynomials, dispersion theory, axiomatization of basic statistical concepts, pollution problems, and transportation problems. I am glad to inform you at this opportunity that an electronic library, recording all of A.M. Mathai's publications, is currently under preparation at the United Nations in Vienna.

The co-author, H.J. Haubold, has applied results of Mathai in the theory of special functions, statistics, and fractional calculus to problems in astrophysics.

“This book is based on selected lectures given by several speakers at the Centre for Mathematical Sciences … from 1995 to 2007. … In the present book these lectures are written up in a style for self-study by scientists, engineers and mathematicians interested in applications … . Who can profit from this book? Physicists, engineers, other scientists, applied mathematicians, economists, looking for a well-readable introduction … . this book is surely recommended to open-minded researchers in any scientific and technical area … .” (Francesco Mainardi, Journal of Approximation Theory, February, 2010)
Buy options