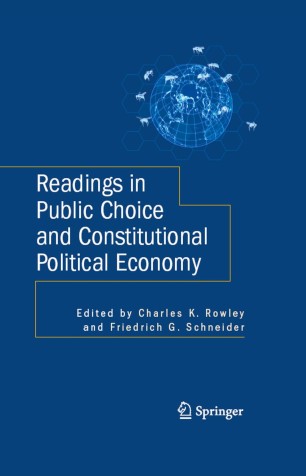 Public choice is the study of behavior at the intersection of economics and political science. Since the pioneering work of Duncan Black in the 1940s, public choice has developed a rich literature, drawing from such related perspectives as history, philosophy, law, and sociology, to analyze political decision making (by citizen-voters, elected officials, bureaucratic administrators, lobbyists, and other "rational" actors) in social and economic context, with an emphasis on identifying differences between individual goals and collective outcomes. Constitutional political economy provides important insights into the relationship between effective constitutions and the behavior of ordinary political markets.

In Readings in Public Choice and Constitutional Political Economy, Charles Rowley and Friedrich Schneider have assembled an international array of leading authors to present a comprehensive and accessible overview of the field and its applications. Covering a wide array of topics, including regulation and antitrust, taxation, trade liberalization, political corruption, interest group behavior, dictatorship, and environmental issues, and featuring biographies of the founding fathers of the field, this volume will be essential reading for scholars and students, policymakers, economists, sociologists, and non-specialist readers interested in the dynamics of political economy.