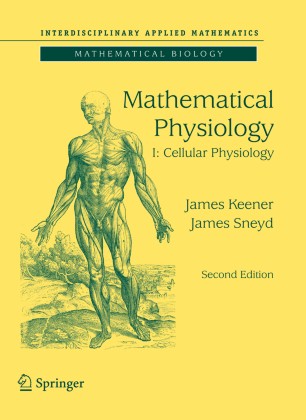 Owing to this extensive coverage, the second edition is published in two volumes. This first volume deals with the fundamental principles of cell physiology and the second with the physiology of systems.

“Probably the best book ever written on the subject of mathematical physiology … It contains numerous exercises, enough to keep even the most diligent student busy, and a comprehensive list of approximately 600 references … highly recommended to anybody interested in mathematical or theoretical physiology.” Mathematical Reviews

“In addition to being good reading, excellent pedagogy, and appealing science, the exposition is lucid and clear, and there are many good problem sets to choose from … Highly recommended.” Journal of the Society of Mathematical Biology

“Most of the chapters, especially those outined in the second part of the book, can constitute whole monographs by themselves, and Keener and Sneyd have attempted to cover some of the fundamental modeling concepts within the respective areas.” Bulletin of Mathematical Biology, 2000

“Both authors are seasoned experts in the field of mathematical physiology and particularly in the field of excitability, calcium dynamics and spiral waves. It directs students to become not merely skilled technicians in biological research but masters of the science.” SIAM, 2004

"This massive new edition … offers an introduction to mathematical physiology that emphasizes work conducted by Keener (Univ. of Utah), Sneyd (Univ. of Auckland, New Zealand), and others over the past 20 years. It is designed as a course resource for beginning graduate students who have … some mathematical background. … Keener and Sneyd have made very reasonable choices in their subject selections. This work is an admirable resource for students with the appropriate prerequisites. Chapters include exercises … . Summing Up: Recommended. Graduate students." (P. Cull, Choice, Vol. 46 (10), June, 2009)

"The texts provide a comprehensive summary of the important concepts in mathematical physiology. … For those actively working in the field of mathematical physiology … is a must have. The new edition includes updated descriptions, new models, and new figures adding to the breadth of the first edition. One of the most beneficial aspects … is the addition of about a decade’s worth of work and references (over 350!). … more advanced questions were added giving more flexibility when used as a course textbook." (Joe Latulippe, The Mathematical Association of America, July, 2009)