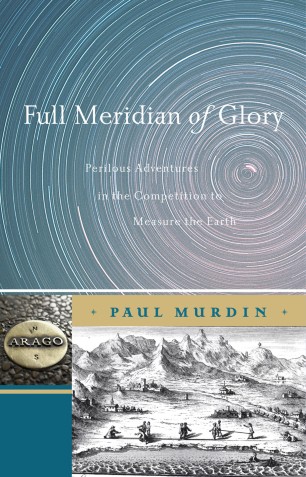 Perilous Adventures in the Competition to Measure the Earth

The Paris Meridian is the name of the line running north-south through the astronomical observatory in Paris. One of the original intentions behind the founding of the Paris Observatory was to determine and measure this line. To that end, the French government financed the Paris Academy of Sciences to do so in the seventeenth to nineteenth centuries employing both astronomers – people who study and measure the stars – and geodesists – people who study and measure the Earth. This book is about what they did and why.

Full Meridian of Glory is the first English language presentation of this historical material in its entirety. It is an attractively written story of the scientists who created the Paris Meridian. They collaborated and worked together in alliances, like scientists everywhere; they also split into warring factions. They transcended national and political disputes, as scientists do now, their eyes fixed on ideals of accuracy, truth and objectivity. Yet also when their work served national interests they were sometimes less than neutral, and if their work was questioned they sometimes blindly descended into petty politics.

This book tells the story of the adventures in France, in Spain, in Lapland and in Ecuador of the scientists who worked through revolution, war, rebellion, piracy, fire, shipwreck, blockade, snow, tropical heat, kidnapping, murder and turbulent love affairs to pursue a problem of map making. They turned that practical problem into a crucial scientific test of one of the most important intellectual problems of their time – Newton’s theory of universal gravitation. Their work changed their own lives, affected the course of science and politics, and left its mark on the landscape, the art and the literature of history and in our own age.