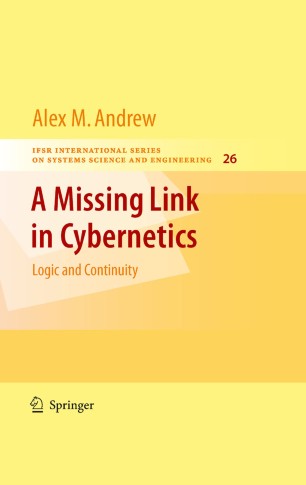 A Missing Link in Cybernetics

The relative failure of attempts to analyze and model intelligence can be attributed in part to the customary assumption that the processing of continuous variables and the manipulation of discrete concepts should be treated separately. In this book, the author considers concept-based thought as having evolved from processing of continuous variables. Although "fuzzy" theory acknowledges the need to combine conceptual and continuous processing, its assumption of the primacy of concept-based processing makes it evolutionarily implausible.

The text begins by reviewing the origins and aims of cybernetics with particular reference to Warren McCulloch’s declared lifetime quest of "understanding man’s understanding". It is shown that continuous systems can undergo complex self-organization, but a need for classification of situations becomes apparent and can be seen as the evolutionary beginning of concept-based processing. Possibilities for complex self-organization are emphasized by discussion of a general principle that has been termed significance feedback, of which backpropagation of errors in neural nets is a special case.

It is also noted that continuous measures come to be associated with processing that is essentially concept-based, as acknowledged in Marvin Minsky’s reference to heuristic connection between problems, and the associated basic learning heuristic of Minsky and Selfridge. This reappearance of continuity, along with observations on the multi-layer structure of intelligent systems, supports a potentially valuable view of intelligence as having a fractal nature. This is such that structures at a complex level, interpreted in terms of these emergent measures, reflect others at a simpler level. Implications for neuroscience and Artificial Intelligence are also examined.

The book presents unconventional and challenging viewpoints that will be of interest to researchers in AI, psychology, cybernetics and systems science, and should help promote further research.