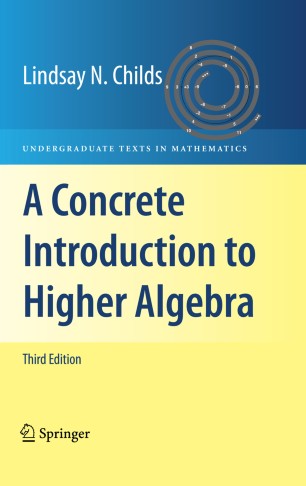 A Concrete Introduction to Higher Algebra

This book is an informal and readable introduction to higher algebra at the post-calculus level. The concepts of ring and field are introduced through study of the familiar examples of the integers and polynomials. A strong emphasis on congruence classes leads in a natural way to finite groups and finite fields. The new examples and theory are built in a well-motivated fashion and made relevant by many applications - to cryptography, error correction, integration, and especially to elementary and computational number theory. The later chapters include expositions of Rabin's probabilistic primality test, quadratic reciprocity, the classification of finite fields, and factoring polynomials over the integers. Over 1000 exercises, ranging from routine examples to extensions of theory, are found throughout the book; hints and answers for many of them are included in an appendix.

"At every stage, a wide variety of applications is presented...The user-friendly exposition is appropriate for the intended audience"

"The style is leisurely and informal, a guided tour through the foothills, the guide unable to resist numerous side paths and return visits to favorite spots..."

"The user-friendly exposition is appropriate for the intended audience. Exercises often appear in the text at the point they are relevant, as well as at the end of the section or chapter. Hints for selected exercises are given at the end of the book. There is sufficient material for a two-semester course and various suggestions for one-semester courses are provided. Although the overall organization remains the same in the second edition¿Changes include the following: greater emphasis on finite groups, more explicit use of homomorphisms, increased use of the Chinese remainder theorem, coverage of cubic and quartic polynomial equations, and applications which use the discrete Fourier transform." MATHEMATICAL REVIEWS

“This book is an introduction to abstract algebra. … it has enough material to give the instructor flexibility in the course. It is a good book for the serious student to have in his/her library. … I would recommend this especially for self-study, as the book reads exactly as a good teacher talks to a class.” (Philosophy, Religion and Science Book Reviews, bookinspections.wordpress.com, October, 2013)

"This book can serve as both an introduction to number theory and abstract algebra, sacrifices have to be made with respect to its algebraic content. … the book has been written with a high degree of rigor and accuracy and I definitely recommend it for consideration as the basis of an alternative route into abstract algebra and its applications." (The Mathematical Association of America, April, 2009)

"The target audience remains students requiring a substantial introduction to the elements of university-level algebra. … the text proceeds throughout on a foundation built from the students’ familiarity with integers and polynomials over fields. Great care is taken to proceed to abstract concepts by way of familiar examples, and a great many exercises are provided throughout the text. … A noteworthy feature of the book is the inclusion of extensive material on applications, to such topics as cryptography and factoring polynomials." (Kenneth A. Brown, Mathematical Reviews, Issue 2009 i)