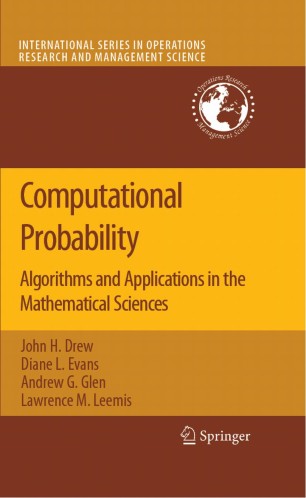 Algorithms and Applications in the Mathematical Sciences

Computational probability encompasses data structures and algorithms that have emerged over the past decade that allow researchers and students to focus on a new class of stochastic problems. COMPUTATIONAL PROBABILITY is the first book that examines and presents these computational methods in a systematic manner. The techniques described here address problems that require exact probability calculations, many of which have been considered intractable in the past. The first chapter introduces computational probability analysis, followed by a chapter on the Maple computer algebra system. The third chapter begins the description of APPL, the probability modeling language created by the authors.  The book ends with three applications-based chapters that emphasize applications in survival analysis and stochastic simulation.

The APPL computational modeling language gives the field of probability a strong software resource to use for non-trivial problems and is available at no cost from the authors. APPL is currently being used in applications as wide-ranging as electric power revenue forecasting, analyzing cortical spike trains, and studying the supersonic expansion of hydrogen molecules. Requests for the software have come from fields as diverse as market research, pathology, neurophysiology, statistics, engineering, psychology, physics, medicine, and chemistry.