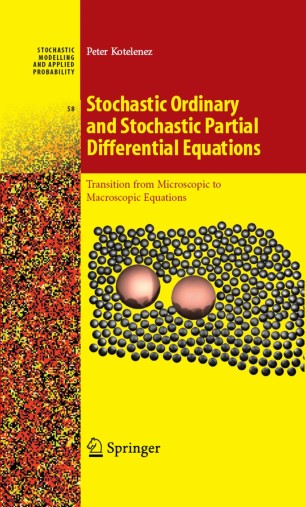 Transition from Microscopic to Macroscopic Equations

A detailed analysis of the SODEs and (quasi-linear) SPDEs is presented. Semi-linear (parabolic) SPDEs are represented as first order stochastic transport equations driven by Stratonovich differentials. The time evolution of correlated Brownian motions is shown to be consistent with the depletion phenomena experimentally observed in colloids. A covariance analysis of the random processes and random fields as well as a review section of various approaches to SPDEs are also provided.

An extensive appendix makes the book accessible to both scientists and graduate students who may not be specialized in stochastic analysis.

Probabilists, mathematical and theoretical physicists as well as mathematical biologists and their graduate students will find this book useful.

Peter Kotelenez is a professor of mathematics at Case Western Reserve University in Cleveland, Ohio.

"This interesting book treats in detail stochastic partial differential equations (SPDEs) describing mass distribution of particles. The book introduces in an essentially self-contained manner the author’s research on the evolution of large particles interacting with an environment consisting, for instance, of small particles. … To help the reader, the book devotes four of the fourteen chapters to the more lengthy proofs of some theorems. … the reviewer recommends this book to any researcher interested in SPDEs." (Carlos M. Mora González, Mathematical Reviews, Issue 2009 h)