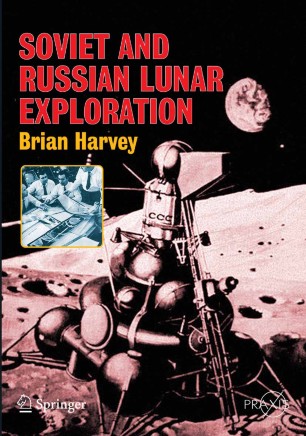 Little is known of Soviet and Russian lunar exploration although, in fact, the Soviet Union/Russia:

Was first to soft land on and orbit the moon

Came very close to sending a cosmonaut around the moon first

Built and successfully tested, in Earth orbit, a lunar lander

Came close to perfecting a giant moon rocket, the N-1

These were remarkable achievements requiring a considerable level of engineering sophistication and have a place in the contemporary story of astronautics. Recent landings on Mars use, essentially, the very techniques developed by Russia to land on and explore the moon in the 1960s and 1970s.

As an acknowledged expert and author of several books on the Soviet and Russian space programme, Brian Harvey is ideally suited to cover not only the engineering and scientific side but also the human stories of the Soviet and Russian lunar programme. These include those of the cosmonaut squad that trained to land on the moon, but was stood down, and of the designers who tried to realise the dream of a Russian moon, from Tikhonravov to Mishin: a Soviet lunar programme was first proposed by designer Mikhail Tikhonravov in a children’s magazine in 1951 and he persuaded a sceptical Soviet leadership of the value of a moon programme. Following Sputnik, the first lunar flights quickly achieved the key goals of hitting, circling and photographing the moon in 1959. The Soviet Union achieved all the early ‘firsts’ in lunar exploration, such as soft landing and orbiting the moon, and Brian Harvey will recount the frantic efforts to rival America’s Apollo and the dramatic hours of 21st July 1969, when Russia tried to soft land Luna 15 in the Sea of Crises even as Armstrong and Aldrin explored the moon in the nearby Sea of Tranquility.

"Brian Harvey, who has written a number of books on aspects of Soviet/Russian space programmes, has produced an excellent work in this latest volume. … A good feature of this book are the little summaries at the end of each chapter or major section, as well as the various statistical tables. There are also lots of illustrations. … Anyone with an interest in the history of Soviet/Russian space activities would find … illuminating and rewarding." (Liftoff, Issue 239, 2007)

"Harvey concisely covers the Soviet space program from the mid-1950s through the mid-1970s. … The book is very readable and a good general survey of the history of the Soviet lunar program … . This would be a good first book for learning about the Soviet lunar program. It has a fairly extensive bibliography for those who wish to delve deeper into this area. Summing Up: Recommended. General readers; lower-division undergraduates." (D. B. Mason, CHOICE, Vol. 45 (2), 2007)