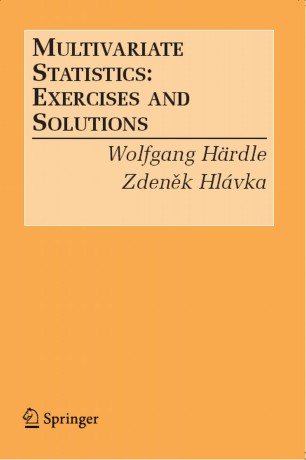 The authors present tools and concepts of multivariate data analysis by means of exercises and their solutions. The first part is devoted to graphical techniques. The second part deals with multivariate random variables and presents the derivation of estimators and tests for various practical situations. The last part introduces a wide variety of exercises in applied multivariate data analysis. The book demonstrates the application of simple calculus and basic multivariate methods in real life situations. It contains altogether 234 solved exercises which can assist a university teacher in setting up a modern multivariate analysis course. All computer-based exercises are available in the R or XploRe languages. The corresponding libraries are downloadable from the Springer link web pages and from the author’s home pages.

Wolfgang Härdle is Professor of Statistics at Humboldt-Universität zu Berlin. He studied mathematics, computer science and physics at the University of Karlsruhe and received his Dr.rer.nat. at the University of Heidelberg. Later he had positions at Frankfurt and Bonn before he became professeur ordinaire at Université Catholique de Louvain. His current research topic is modelling of implied volatilities and the quantitative analysis of financial markets.

“In general, I find this book particularly instructive, by discussing various techniques and analytical tools via exercises with rigorous solutions. The computer codes for computer-based exercises are available in R or XploRe languages through the Springer link web pages and from the authors’ home pages. The web links also provide access to real datasets used in the book. This is a very useful exercise book for students and instructors as well as for nonexperts using in applied multivariate data analysis. There has been large demand for techniques to handle and analyze high-dimensional data. In this regard, the book would be a good reference for researchers and students working in the theory or applications of multivariate statistical analysis.” (Journal of the American Statistical Association, Dec. 2009, Vol. 104, No. 488)
Buy options