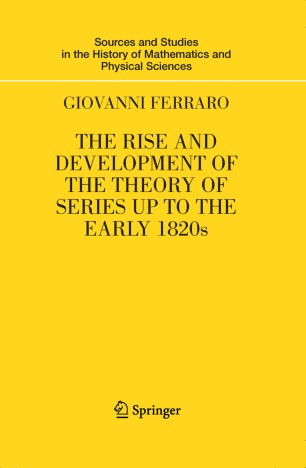 The theory of series in the 17th and 18th centuries poses several interesting problems to historians. Most of the results derived from this time were derived using methods which would be found unacceptable today, and as a result, when one looks back to the theory of series prior to Cauchy without reconstructing internal motivations and the conceptual background, it appears as a corpus of manipulative techniques lacking in rigor whose results seem to be the puzzling fruit of the mind of a magician or diviner rather than the penetrating and complex work of great mathematicians.

This monograph not only describes the entire complex of 17th and 18th century procedures and results concerning series, but it also reconstructs the implicit and explicit principles upon which they are based, draws attention to the underlying philosophy, highlights competing approaches, and investigates the mathematical context where the theory originated. The aim here is to improve the understanding of the framework of 17th and 18th century mathematics and avoid trivializing the complexity of historical development by bringing it into line with modern concepts and views and by tacitly assuming that certain results belong, in some sense, to a unified theory that has come down to us today.