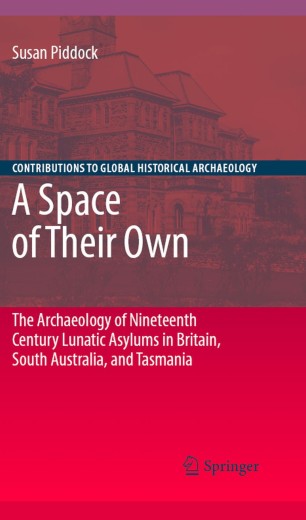 A Space of Their Own: The Archaeology of Nineteenth Century Lunatic Asylums in Britain, South Australia and Tasmania

The history of lunatic asylums – what do we really know about them? Films and television programs have portrayed them as places of horror where the patients are restrained and left to listen to the cries of their fellow inmates in despair. But what was the world of nineteenth century lunatic asylums really like? Are these images true? This book will explore this world using the techniques of historical archaeology and history.

In the late eighteenth and early nineteenth centuries the advent of new treatments for insanity based on moral therapy and non-restraint, and an increasing social awareness of the conditions in which the insane were being kept led to a new focus on the provisions made for the insane in  " madhouses " , lunatic asylums and hospitals. In response to this new focus those interested in the reform of these places and the new treatment regimes began to describe what lunatic asylums should be if they were going to bring the insane back to sanity. In this book a new methodology is developed using these descriptions as the basis of a series of ‘ideal’ asylum models. A comparison of these ‘ideal’ asylums to the lunatic asylums built in England, South Australia and Tasmania allows us to enter the world of the nineteenth century asylum, and to understand the effects of achieving or failing to achieve the ‘ideal’ asylum on life within these places.

Through the case studies of England, South Australia, and Tasmania, this book seeks to identify the forces at work within each society that led to the particular provisions being made for the insane in each place. It will be argued that the adoption of the ‘ideal’ asylum features can be directly related to a number of key factors, these were: access to a pool of knowledge about lunatic asylum design; economic constraints; the treatment mode adopted; and social perceptions of who was to be accommodated in the asylum - paupers, the middle class, the higher class, or convicts.