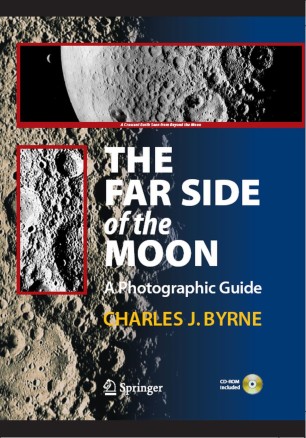 This book is a companion to Byrnes's award-winning Lunar Orbiter Photographic Atlas of the Near Side of the Moon (Springer, 2005). It provides comprehensive coverage of the far side of the Moon, and is the first book that collects photographs from all five Lunar Orbiter missions: Clementine, Apollo, Luna, Zond, and Nozomi. As in the previous book, the scanning artifacts of the Lunar Orbiter photos have been cleaned.
The photographs show each part of the far side in the most favorable resolution and sun angle. There are many high-altitude oblique photos that provide a feeling of being in space; this book is more like a photographic tour of the far side than an atlas.  The striking differences between the near and far side have been a major mystery for astronomers but this book suggests an explanation: a massive early impact on the near side produced the Near Side Megabasin; an impact so large that its rim is on the far side. The floor of this basin established the canvas for the portrait of the Man in the Moon and its ejecta prepared the far side for the rugged array of basins and craters shown in these photos.
Since many professional and amateur astronomers direct their telescopes to the near side of the Moon; these photos provide a unique opportunity to become familiar with the far side!