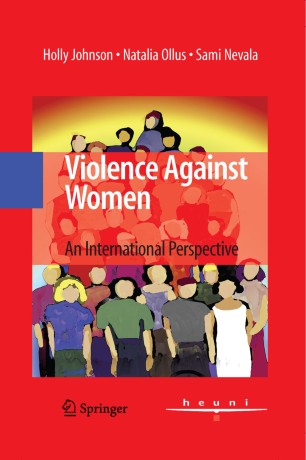 The International Violence against Women Survey (IVAWS) has interviewed over 23,000 women in eleven countries (including Australia, Costa Rica, the Czech Republic, Denmark, Greece, Hong Kong, Italy, Mozambique, the Philippines, Poland and Switzerland) about their experiences with gender-based violence. Violence against Women: An International Perspective presents the comparative results for nine of these countries, testing current theories about male violence against women, and offering both global context and implications for other areas of the world. Included are findings on:

These data are vital to researchers, advocates, and policymakers working to assist survivors and eliminate gender-based violence worldwide. In addition, the authors offer immediate and long-range proposals, from promoting gender equality and improving service delivery to victims to improved prevention, monitoring and evaluation.

Holly Johnson is Associate Professor Criminology at the University of Ottawa, Canada. Her interest and involvement in research designed to improve the measurement of women’s experiences of violence spans two decades. During a career at Statistics Canada, she was principal investigator of the first national survey on violence against women which pioneered a methodology for interviewing women on sensitive topics. This has served as a model for the development of similar surveys in many countries, including the International Violence Against Women Survey. Holly is author of Dangerous Domains: Violence Against Women in Canada, as well as numerous peer-reviewed journal articles and government statistical reports. She served as expert advisor to the Secretary-General’s report on violence against women, and is a member of the UNECE Task Force on Violence Against Women Surveys, the UN Expert Group on Indicators on Violence Against Women, the World Health Organization expert panel on primary prevention of sexual violence and intimate partner violence, and co-investigator of the Canadian Observatory on the Justice System’s Response to Intimate Partner Violence.

Natalia Ollus is Senior Programme Officer at the European Institute for Crime Prevention and Control, affiliated with the United Nations (HEUNI) in Helsinki, Finland. She has also worked at the Regional Office in Southern Africa of the United Nations Office on Drugs and Crime (UNODC) and as a diplomat for the Permanent Mission of Finland to the United Nations in New York, promoting the Rule of Law and good governance. She is a social scientist with expertise in violence against women victimisation studies, crime surveys and criminal justice technical assistance, including in the area of combating trafficking in persons. She managed the IVAWS project at HEUNI and was also responsible for technical support and guidance in carrying out the IVAWS in Mozambique.

Sami Nevala is a Research Officer at the European Institute for Crime Prevention and Control, affiliated with the United Nations (HEUNI) in Helsinki, Finland, while currently working as a Seconded National Expert at the European Union Agency for Fundamental Rights. He is a statistician specialised in victimisation surveys and cross-national survey research. He is also the editor of several HEUNI publications on crime and crime statistics. He has worked as a statistical consultant for United Nations Office on Drugs and Crime (UNODC), United Nations Interregional Crime and Justice Research Institute (UNICRI) and the Office of the High Commissioner for Human Rights.