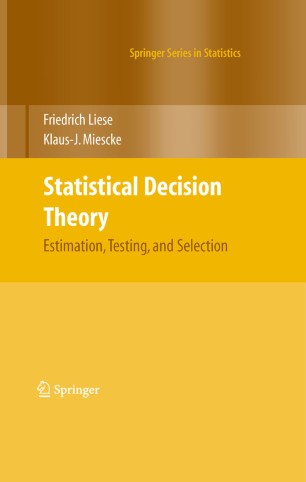 This monograph is written for advanced graduate students, Ph.D. students, and researchers in mathematical statistics and decision theory. All major topics are introduced on a fairly elementary level and then developed gradually to higher levels. The book is self-contained as it provides full proofs, worked-out examples, and problems. It can be used as a basis for graduate courses, seminars, Ph.D. programs, self-studies, and as a reference book.

The authors present a rigorous account of the concepts and a broad treatment of the major results of classical finite sample size decision theory and modern asymptotic decision theory. Highlights are systematic applications to the fields of parameter estimation, testing hypotheses, and selection of populations. With its broad coverage of decision theory that includes results from other more specialized books as well as new material, this book is one of a kind and fills the gap between standard graduate texts in mathematical statistics and advanced monographs on modern asymptotic theory.

One goal is to present a bridge from the classical results of mathematical statistics and decision theory to the modern asymptotic decision theory founded by LeCam. The striking clearness and powerful applicability of LeCam’s theory is demonstrated with its applications to estimation, testing, and selection on an intermediate level that is accessible to graduate students. Another goal is to present a broad coverage of both the frequentist and the Bayes approach in decision theory. Relations between the Bayes and minimax concepts are studied, and fundamental asymptotic results of modern Bayes statistical theory are included. The third goal is to present, for the first time in a book, a well-rounded theory of optimal selections for parametric families.

"The central theme of this book is ‘what optimal decisions are in general and in specific decision problems, and how to derive them’; optimality is understood in terms of the expected loss, i.e. the risk functional, or some function of it.… This monograph is, undoubtedly, a significant event in the development of statistical decision theory." (Yurij S. Kharin, American Mathematical Society, Mathematical Reviews on the Web, MR2421720)

"This book is unique in offering a fuller point of view of selection rules,.… An other feature is that is combines innovation and tradition. This monograph uniquely synthesizes otherwise disparate materials, while establishing connections between classical and modern decision theory. Actually it creates a bridge between the classical results of mathematical statistics and the modern asymptotic decision theory.… also provides a broad coverage of both the frequentist and the Bayes approaches in decision theory." (2009 European Mathematical Society, FIZ Karlsruhe & Springer-Velag, ZBl 1154.62008)

"The central theme of this book is the nature of optimal decisions, in both general and specific problems, and how to reach them. … This is a deep theoretical and mathematical presentation of decision theory, which I imagine will become a leading reference work for researchers in the area." (David J. Hand, International Statistical Review, Vol. 76 (3), 2008)

"This monograph is written not only as a basis for graduate courses, but also as a reference tool. Readers should be familiar with basic concepts of probability theory, mathematical statistics, and analysis. … This book also provides a broad coverage of both the frequentist and the Bayes approaches in decision theory. The Bayes approach is considered to be a useful decision-theoretic framework among others, and it is used heavily throughout the book … ." (R. Schlittgen, Zentralblatt MATH, Vol. 1154, 2009)

“The authors characterize this book as a monograph intended for graduate students in mathematical Statistics. As such, it should be suitable as the basis for an advanced class in decision theory. …The book’s coverage is both comprehensive and general. …a solid addition to the literature of decision theory from a formal mathematical statistics approach. …” ((Journal of the American Statistical Association, September 2009, Vol. 104, No. 487)