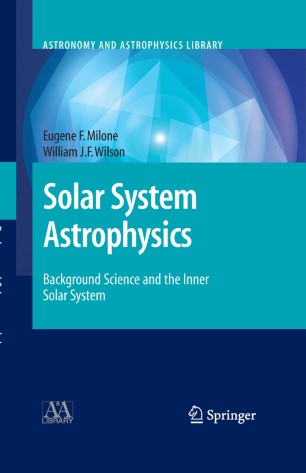 Solar System Astrophysics: A Text for the Science of Planetary Systems covers the field of solar system astrophysics beginning with basic tools of spherical astronomy, coordinate frames, and celestial mechanics. Historical introductions precede the development and discussion in most chapters.

After a basic treatment of the two- and restricted three-body system motions in Background Science and the Inner Solar System, perturbations are discussed, followed by the Earth's gravitational potential field and its effect on satellite orbits. This is followed by analysis of the Earth-Moon system and the interior planets.

In Planetary Atmospheres and the Outer Solar System, the atmospheres chapters include detailed discussions of circulation, applicable also to the subsequent discussion of the gas giants. The giant planets are discussed together, and the thermal excesses of three of them are highlighted. This is followed by chapters on moons and rings, mainly in the context of dynamical stability, comets and meteors, meteorites and asteroids, and concludes with an extensive discussion of extrasolar planets.

The contents of Solar System Astrophysics: A Text for the Science of Planetary Systems have been field-tested by students for many years. Eugene F. Milone and William J.F. Wilson have written a unique book that presents an up-to-date overview on all essential topics based on extensive experience in the classroom.