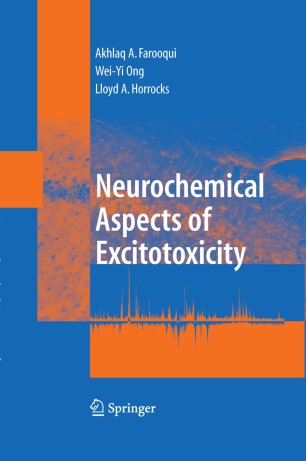 In the past decade, our understanding of the biochemistry, molecular biology, and neuropathology of the glutamate transporters and receptors has exploded. It is becoming increasingly evident that molecular mechanisms, which govern the transfer of the death signal from the neural cell surface to the nucleus, depend on lipid mediators and on cross talk among excitotoxicity, oxidative stress, and neuroinflammation, and that interactions among these three processes play a major role in neuronal cell death during acute neural trauma and neurodegenerative disease. These processes may be primary initiating points in neurodegeneration or they may be the end result of the neurodegenerative process itself.

Neurochemical Aspects of Excitotoxicity provides extensive insight into glutamate transporters and receptors, including their role in the brain with other neurochemical parameters in excitotoxicity, and possible treatments. This book will be of interest to scientists already working in the field of excitotoxicity who are interested in gaining a broader understanding of this complicated subject area, as well as graduate students and neurologists who are curious about a common cause of neuronal injury and neurological disorders.

Akhlaq A. Farooqui, Wei-Yi Ong, and Lloyd A. Horrocks are leaders in the field of glycerophospholipid metabolism mediated by glutamate in neural membranes. They have reported the stimulation of isoforms of phospholipases A2 caused by glutamate toxicity and increased activities of phospholipases A2 in brains from patients with Alzheimer disease. They have published cutting edge research on kainate-mediated alterations in glycerophospholipid, sphingolipid, and cholesterol-derived lipid mediators during excitotoxicity. Akhlaq A. Farooqui and Lloyd A. Horrocks are the authors of the monograph, Glycerophospholipids in the Brain: Phospholipases A2 in Neurological Disorders (Springer 2007). Lloyd A. Horrocks is the founding editor of the journal Molecular and Chemical Neuropathology, and has edited seven other books.