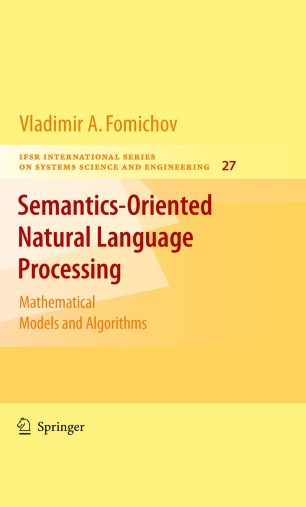 This book examines key issues in designing semantics-oriented natural language (NL) processing systems. One of the key features is an original strategy for transforming the existing World Wide Web into a new generation Semantic Web (SW-2) and the basic formal tools for its realization, which are proposed. The principal distinguishing feature of the proposed SW-2 is the well-developed ability of NL processing.

A broad conceptual framework for describing structured meanings of NL-texts (sentences and arbitrarily complex discourses) is obtained by introducing a mathematical model describing 10 interrelated partial operations on conceptual structures. A new class of formal languages called standard knowledge languages (SK-languages) is defined. Readers will gain knowledge of these languages and learn a way of building semantic representations using them.

Additionally, a broadly applicable mathematical model of a linguistic database is constructed. A useful for practice and strongly structured multi-lingual algorithm of semantic-syntactic analysis of NL-texts is described by means of original formal concepts; the input texts can be sentences in English, Russian, and German.

With extensive use of examples and illustrations to clarify complex material and demonstrate practical applications, many historical and bibliographical notes, end-of-chapter exercises, and glossaries, this book can serve as a graduate-level textbook, as well as a good reference for researchers and practitioners who deal with the various problems involving semantics of natural language texts, ontologies, Semantic Web, semantic data integration in e-science, and content languages in multi-agent systems, in particular, in e-commerce and e-health.

“The book is focused on two areas of research. First of all, it offers theoretical insights into a recent research program concerned with the development of formal models and methodologies … . Second, and from a practical perspective, it puts forward efficient tools to develop semantic technologies … . The book provides interesting theoretical and practical guidance for overcoming the problems associated with the design of semantics-oriented natural language processing systems in different real-world fields, being thus a valuable source for experienced researchers … .” (Catalin Stoean, Zentralblatt MATH, Vol. 1195, 2010)
Buy options