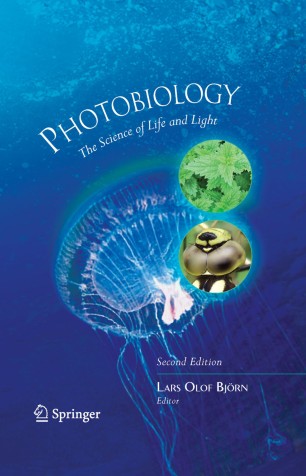 The Science of Life and Light

Since the publication of the first edition in 2002, there has been an explosion of new knowledge in the field of photobiology.

Photobiology: The Science of Life and Light, Second edition, is fully updated and offers eight new chapters for a comprehensive look at photobiology. The chapters cover all areas of photobiology, photochemistry, and relationship between light and biology, each with up-to-date references. The chapter authors (of which seven are new) have very different backgrounds, and have produced a truly cross-disciplinary treatise.

The book starts with the physics and chemistry of light, and how to handle light in the laboratory and measure it in the field, the properties of daylight, and new uses of light in research. It deals with the evolution of photosynthesis and with the mechanisms of its primary steps. Four chapters deal with how organisms use light for their orientation in space and time: the biological clock and its resetting by light, the light-dependent magnetic compass, and photoperiodism in animals and plants. There are also several medically oriented chapters and two chapters specifically aimed at the photobiology educator.

The book is suitable for biologically interested readers at different levels from undergraduates to professors, researchers and medical doctors.

Lars Olof Björn is professor emeritus at Lund University and has earned several prizes for popularizing science, as well as a Linnaeus prize for botany and a Rimington prize for photobiology. He is a member of the Royal Swedish Academy of Sciences and was on the board of the International Photobiology Association for twelve years.