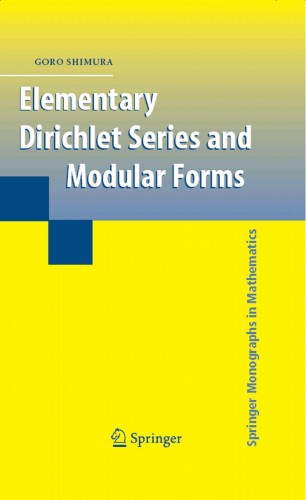 The main topics of the book are the critical values of Dirichlet L-functions and Hecke L-functions of an imaginary quadratic field, and various problems on elliptic modular forms. As to the values of Dirichlet L-functions, all previous papers and books reiterate a single old result with a single old method. After a review of elementary Fourier analysis, the author presents completely new results with new methods, though old results will also be proved. No advanced knowledge of number theory is required up to this point. As applications, new formulas for the second factor of the class number of a cyclotomic field will be given.

The second half of the book assumes familiarity with basic knowledge of modular forms. However, all definitions and facts are clearly stated, and precise references are given. The notion of nearly holomorphic modular forms is introduced and applied to the determination of the critical values of Hecke L-functions of an imaginary quadratic field. Other notable features of the book are: (1) some new results on classical Eisenstein series; (2) the discussion of isomorphism classes of elliptic curves with complex multiplication in connection with their zeta function and periods; (3) a new class of holomorphic differential operators that send modular forms to those of a different weight.

The book will be of interest to graduate students and researchers who are interested in special values of L-functions, class number formulae, arithmetic properties of modular forms (especially their values), and the arithmetic properties of Dirichlet series. It treats in detail, from an elementary viewpoint, the simplest cases of a fundamental area of ongoing research, the only prerequisite being a basic course in algebraic number theory.

"This book contains new results, e.g., new formulas for special values of certain Dirichlet series. … Shimura’s exposition, shaped to his (celebrated and) distinctive viewpoint, serves as the ideal platform for the new material. … by dint of the prestige of the author and the subject, it undoubtedly deserves a place in a college library. … Summing Up: Recommended. Upper-division undergraduates through faculty." (D. V. Feldman, CHOICE, Vol. 45 (9), 2008)

"It will be of great interest for everybody who is interested in modular forms and/or L-series. … the monograph will be accessible to graduate students and will quickly lead them to frontiers of current research. The book is written in the well-known masterly style of the author … ." (Jürgen Elstrodt, Zentralblatt MATH, Vol. 1148, 2008)