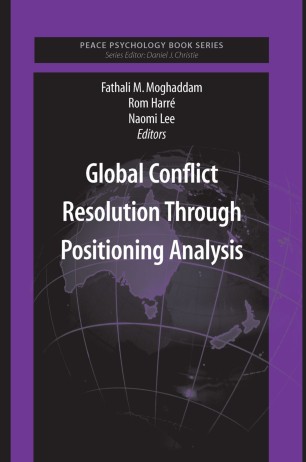 Positioning analysis penetrates beneath surface issues to their underlying psychological causes and social effects, with the intention of defusing conflict and preventing existing conflict from escalating. As the growing literature shows, positioning analysis methods are not only effective in interpersonal and intergroup problems, but have considerable potential for resolving disputes on the world stage. Global Conflict Resolution through Positioning Analysis starts with the daily disputes that result from our multiple social identities and evolving self-definitions, offers a new framework for understanding historical conflict, and brings vital new perspectives to current political and ideological battles. Twenty expert contributors examine scenarios as simple as a committee meeting of four people, as complicated as centuries-old social movements and the shifting tensions in the Middle East.

Its scope of coverage and depth of vision make Global Conflict Resolution through Positioning Analysis a reference as vital to professionals—negotiators and conflict managers, social and peace psychologists—as to students and researchers studying peace and conflict.