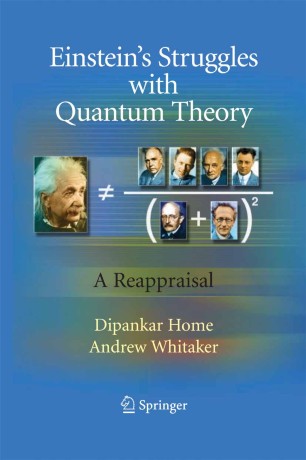 Einstein’s Struggles with Quantum Theory: A Reappraisal by Dipankar Home and Andrew Whitaker provides a detailed account of Albert Einstein’s thinking in regard to quantum physics. Until recently, most of Einstein’s views on quantum physics were dismissed and even ridiculed; some critics even suggested that Einstein was not able to grasp the complexities of the formalism of quantum theory and subtleties of the standard interpretation of this theory known as the Copenhagen interpretation put forward by Niels Bohr and his colleagues.

But was that true? Modern scholarship argues otherwise, insist Drs. Home and Whitaker, who painstakingly explain the questions Einstein raised as well as offer a detailed discussion of Einstein’s position and major contributions to quantum theory, connecting them with contemporary studies on fundamental aspects of this theory.

This unique book presents a mathematical as well as a non-mathematical route through the theories, controversies, and investigations, making the discourse both readable and understandable to anyone interested in Einstein and quantum theory. The authors also examine recent developments in quantum theory and reveal the influence Einstein has had, and will continue to have, in this important field.

"It is immensely refreshing...to find a book which at last pays due respect to the later views of Einstein...Dipankar Home and Andrew Whitaker have provided us with masterly expositions on the issues....This book is likely to retain a very significant role for such developments [in quantum theory] for many decades to come."