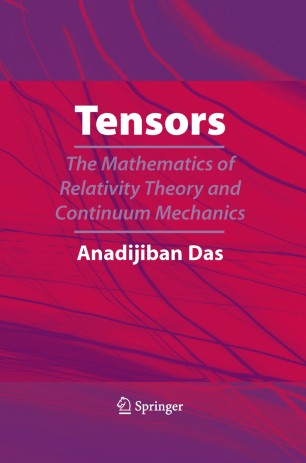 The Mathematics of Relativity Theory and Continuum Mechanics

Tensors:  The Mathematics of Relativity Theory and Continuum Mechanics, by Anadijiban Das, emerged from courses taught over the years at the University College of Dublin, Carnegie-Mellon University and Simon Fraser University.

This book will serve readers well as a modern introduction to the theories of tensor algebra and tensor analysis.  Throughout Tensors, examples and worked-out problems are furnished from the theory of relativity and continuum mechanics.

Topics covered in this book include, but are not limited to:

Anadi Das is a Professor Emeritus at Simon Fraser University, British Columbia, Canada.  He earned his Ph.D. in Mathematics and Physics from the National University of Ireland and his D.Sc. from Calcutta University.  He has published numerous papers in publications such as the Journal of Mathematical Physics and Foundation of Physics.  His book entitled The Special Theory of Relativity: A Mathematical Exposition was published by Springer in 1993.

"This book is a very nice introduction to the theory of tensor analysis on differentiable manifolds. It is intended mainly for students, but it can also be useful to everyone interested in the tensor analysis on differentiable manifolds and its application to the relativity theory and continuum mechanics." (Cezar Dumitru Oniciuc, Zentralblatt MATH, Vol. 1138 (16), 2008)