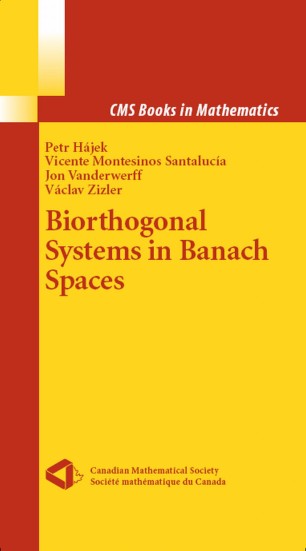 The main theme of this book is the relation between the global structure
of Banach spaces and the various types of generalized "coordinate
systems" - or "bases" - they possess.  This subject is not new and has
been investigated since the inception of the study of Banach spaces.  In
this book, the authors systematically investigate the concepts of
Markushevich bases, fundamental systems, total systems and their
variants. The material naturally splits into the case of separable
Banach spaces, as is treated in the first two chapters, and the
nonseparable case, which is covered in the remainder of the book.  This
book contains new results, and a substantial portion of this material
has never before appeared in book form.  The book will be of interest to
both researchers and graduate students.

Topics covered in this book include:

"This monograph is devoted to the study of the different types of coordinate systems that may exist in infinite-dimensional Banach spaces. … will certainly become a great reference book for specialists in nonseparable Banach space theory. Its contents are comprehensive and perfectly up to date. Very recent results are included and several proofs are simplified and given with their optimal form. It must be mentioned that this book is also accessible to graduate students and young researchers willing to discover this area." (Gilles Lancien, Mathematical Reviews, Issue 2008 k)

"The book under review contains a clear, detailed and self-contained exposition of the modern state-of-the-art in the biorthogonal systems theory. … one of their goals is to attract young mathematicians to Banach space theory. In my opinion, the book perfectly serves this purpose. … Every chapter contains an exercises section. Exercises … are supplied with hints and references to the corresponding literature."(Vladimir Kadets, Zentralblatt MATH, Vol. 1136 (14), 2008)