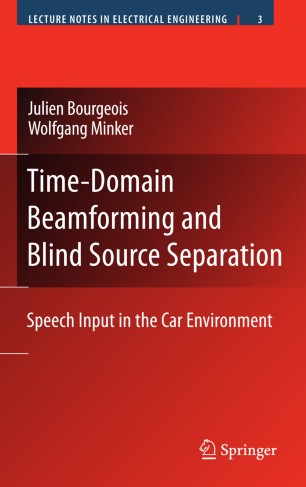 Speech Input in the Car Environment

Time-Domain Beamforming and Blind Source Separation addresses the problem of separating spontaneous multi-party speech by way of microphone arrays (beamformers) and adaptive signal processing techniques. While existing techniques require a Double-Talk Detector (DTD) that interrupts the adaptation when the target is active, the described method addresses the separation problem using continuous, uninterrupted adaptive algorithms. With this approach, algorithm development is much simpler since no detection mechanism needs to be designed and needs no threshold to be tuned. Also, performance can be improved due to the adaptation during periods of double-talk.

The authors use two techniques to achieve these results: implicit beamforming, which requires the position of the target speaker to be known; and time-domain blind-source separation (BSS), which exploits second-order statistics of the source signals. In combination, beamforming and BSS can be used to develop novel algorithms. Emphasis is placed on the development of an algorithm that combines the benefits of both approaches. The book presents experimental results obtained with real in-car microphone recordings involving simultaneous speech of the driver and the co-driver. In addition, experiments with background noise have been carried out in order to assess the robustness of the considered methods in noisy conditions.