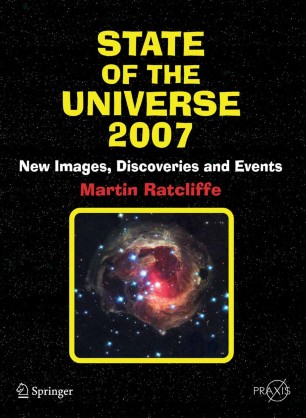 The aim of State of the Universe 2007 (and subsequent volumes issued annually) is to provide an annual astronomy review suitable for the popular science level reader to be published every year in September in a format that will be suitable for an appeal to the Christmas market. The book will cover all major astronomical news on topics beyond the Solar System and place them in the context of the longer term goals that astronomers and astrophysicists around the world are aiming for. The target is to capture the excitement and vibrancy of modern astronomical research. The book will present a complete list of the major announcements, discoveries and news items from each year, with the major ones being explained in detail through selected chapters being written by invited contributors who are at the forefront in those fields. The January meeting of the American Astronomical Society each year will be the major source of astronomical news for the following year’s volume, giving access to potential authors and contacts with public information officers of major observatories, space centers, etc.

The regular set features, which will appear every year, will include an annual chronological list of the latest discoveries announced during the previous twelve months; a review of the major news stories of the year with the main characters; a list of launches of major astronomical observatories/satellites during the past year; a list of planned future astronomical satellites; basic data on all astronomical observatories currently in operation with web links for the reader to dig deeper; list of anniversaries and landmarks; the latest from the BadAstronomy website by Dr Phil Plait, and the cartoon feature.

"The most exciting discoveries in astronomy and astrophysics in a new annual. Fascinating developments in the understanding of our origins, of the early beginnings of the Universe, of how planets are formed, and how stars live out their lives and die, occur every month. … Rarely are such details offered in one place – until now. State of the Universe 2007 fills the gap between research and everyday news." (PhysicsWeb, January, 2007)

"State of the Universe is an unconventional annual aimed at adults. Billed as a compendium of the newest discoveries in astronomy, it reveals the latest on our favourite astronomical characters – our galaxy, the Hubble Space Telescope … among many others. Useful as a summary of the year’s findings for those new to stargazing … it is … fascinating." (Justin Mullins, New Scientist, March, 2007)

"This is the first volume in a planned annual effort to chronicle the important news events, discoveries, and significant developments in astronomy for the previous year. … Ratcliffe … a well-known educator in astronomy, uses a popular style of writing to make the text interesting and approachable to laypeople. The fast pace of developments and discoveries in astronomy makes this new annual a welcome addition for most libraries. … Libraries should make this work a continuing acquisition … . Summing Up: Highly recommended. All levels." (J. O. Christensen, CHOICE, Vol. 44 (11), July, 2007)