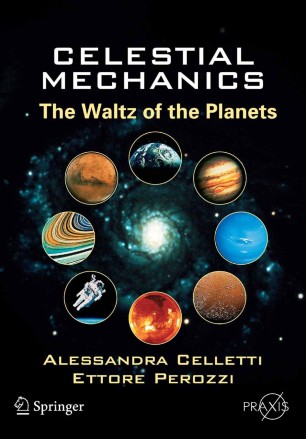 The Waltz of the Planets

I was delighted to be invited by my colleagues Alessandra Celletti and Ettore Perozzi to provide a foreword to their book, Celestial Mechanics: The Waltz of the Planets. Having known them for many years and long admired their work in the subject so many of us love and are fascinated by, 1 read with great attention and pleasure the text when it arrived. It is a formidable task they have set themselves, to provide a book that describes attempts by successive generations of astronomers from the dawn of history five millennia ago to observe, record and understand the phenomena of the heavens, particularly the intricate and perplexing behaviour of the planets. Sun and Moon. As naked eye astronomy became aided by the telescope and the photographic plate, and since the middle of the twentieth century, by instruments launched on spacecraft into circum- Earth orbit or to the Moon and planets and beyond, the discovery of new satellites, scores of them, and ring systems displaying new and initially perplexing behaviour also demanded explanations for that behaviour. It is also the inspiring story of science itself with special reference to how lonely individuals, impelled by curiosity and dedicated to seeking the truth, and nothing but the truth, about the fascinating phenomena of nature, ultimately became accepted as scientists, those players in the most successful endeavour ever engaged in by the human race.