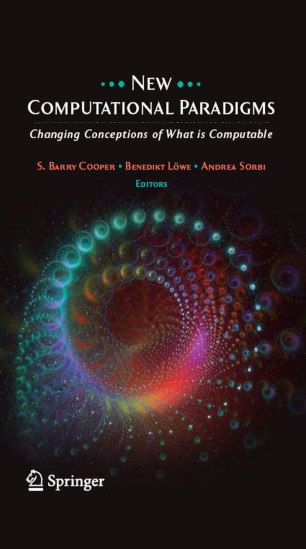 Changing Conceptions of What is Computable

In recent years, classical computability has expanded beyond its original scope to address issues related to computability and complexity in algebra, analysis, and physics. The deep interconnection between "computation" and "proof" has originated much of the most significant work in constructive mathematics and mathematical logic of the last 70 years. Moreover, the increasingly compelling necessity to deal with computability in the real world (such as computing on continuous data, biological computing, and physical models) has brought focus to new paradigms of computation that are based on biological and physical models. These models address questions of efficiency in a radically new way and even threaten to move the so-called Turing barrier, i.e. the line between the decidable and the un-decidable.

This book examines new developments in the theory and practice of computation from a mathematical perspective, with topics ranging from classical computability to complexity, from biocomputing to quantum computing. The book opens with an introduction by Andrew Hodges, the Turing biographer, who analyzes the pioneering work that anticipated recent developments concerning computation’s allegedly new paradigms. The remaining material covers traditional topics in computability theory such as relative computability, theory of numberings, and domain theory, in addition to topics on the relationships between proof theory, computability, and complexity theory. New paradigms of computation arising from biology and quantum physics are also discussed, as well as the computability of the real numbers and its related issues.

This book is suitable for researchers and graduate students in mathematics, philosophy, and computer science with a special interest in logic and foundational issues. Most useful to graduate students are the survey papers on computable analysis and biological computing. Logicians and theoretical physicists will also benefit from this book.

“It is addressed to researcher and graduate students … . All contributions to the book have been rigorously refereed, and the standards with respect to layout, references … are high. … This is a piece of excellent pedagogical work. The paper is hereby recommended. … I personally find very readable and informative. … I enjoyed reading these papers, and I assume they are all right when we take them for what they are … .”­­­ (Lars Kristiansen, Studia Logica, Vol. 97, 2011)
Buy options