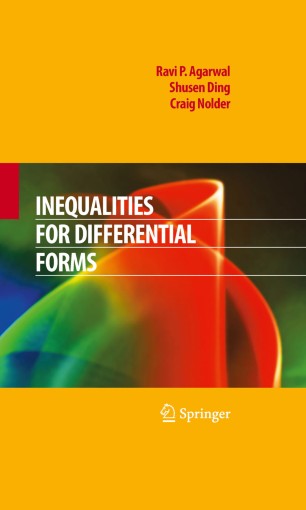 During the recent years, differential forms have played an important role in many fields. In particular, the forms satisfying the A-harmonic equations, have found wide applications in fields such as general relativity, theory of elasticity, quasiconformal analysis, differential geometry, and nonlinear differential equations in domains on manifolds.

This monograph is the first one to systematically present a series of local and global estimates and inequalities for differential forms.  The presentation concentrates on the Hardy-Littlewood, Poincare, Cacciooli, imbedded and reverse Holder inequalities.  Integral estimates for operators, such as homotopy operator, the Laplace-Beltrami operator, and the gradient operator are also covered.  Additionally, some related topics such as BMO inequalities, Lipschitz classes, Orlicz spaces and inequalities in Carnot groups are discussed in the concluding chapter.  An abundance of bibliographical references and historical material supplement the text throughout.

This rigorous text requires a familiarity with topics such as differential forms, topology and Sobolev space theory.  It will serve as an invaluable reference for researchers, instructors and graduate students in analysis and partial differential equations and could be used as additional material for specific courses in these fields.