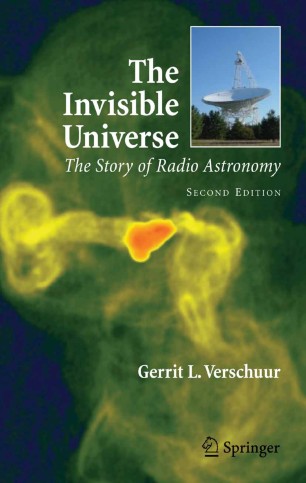 The Story of Radio Astronomy

Hidden from human view, accessible only to sensitive receivers attached to huge radio telescopes, giant versions of backyard satellite dishes, the invisible universe beyond our senses continues to fascinate and intrigue our imaginations. We cannot really comprehend what it means to say that a galaxy is exploding, yet that is the nature of some of the distant radio sources in the furthest reaches of space. Closer to home, in the Milky Way galaxy, radio astronomers listen patiently to the ticking of pulsars that tell of star death and states of matter of awesome densities. And between the stars, radio emission from a host of over 120 complex molecules radiate outward to reveal a tale about chemical processes that produce the very stuff of life. And all of this happens out there in the universe hidden from our eyes, even when aided by the Hubble Space Telescope.

This is the story of radio astronomy, of how radio waves are generated by stars, supernova, quasars, colliding galaxies, and by the very beginnings of the universe itself. In The Invisible Universe, you learn what astronomers are doing with those huge dishes in the New Mexico desert, in a remote valley in Puerto Rico, in the green Pocahontas Valley in West Virginia, as well as dozens of other remote sites around the world. With each of these observatories, the scientists collect and analyze their data, "listening" to the radio signals from space, in order to learn what is out there, and perhaps even if someone else may be listening as well.

Author of seven books, co-author or editor of 3 text books in radio astronomy and astronomy in general, has written over 80 scientific research articles, and  90 + popular astronomy articles.  He lectures widely on astronomical topics, pioneered the study of the interstellar magnetic field and active in radio astronomical studies of interstellar matter for over 40 years.  Published the first ever, full-length, technical paper on the radio search for extraterrestrial intelligence in 1973.  Has taught in the physics departments of some half-a-dozen universities, world-wide.  He is the holder of a dozen patents.

"In this new edition (1st ed., 1974), radio astronomer/science writer Verschuur (Univ. of Memphis) both entertains and informs about the contribution that radio astronomy is making towards an understanding of the universe. … A number of the excellent figure are in color; good appendixes cover definitions and the many terms unique to the field … . For reader interested in the development and status of this very interesting and important subfield of astronomy. Summing Up: Highly recommended. All levels." (W. E. Howard III, CHOICE, Vol. 44 (11), August, 2007)