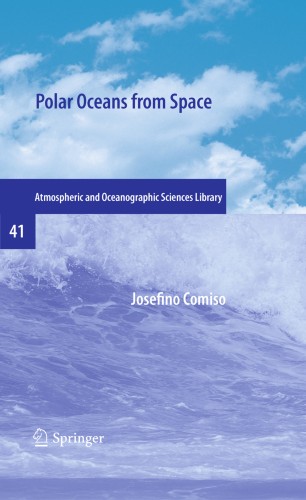 The book presents a wealth of material about the polar oceans, more specifically the ice-covered areas and peripheral seas. It provides a detailed history of the changing climate of the polar oceans as observed by satellite sensors in the last three decades. The satellite research data show spatial distributions of surface temperature, sea ice, albedo, chlorophyll concentration, clouds, ocean color and sea level pressure.

The book discusses remote sensing techniques and algorithms used to transform digital data to geophysical parameters, to process and analyze the data, the limitations of these data and the enormous potential in the use of this data. The main goal of the book is the presentation of results from studies of the time evolution of polar surfaces as observed by satellite sensors and their relevance to the study of cryospheric and ocean processes and climate change. The book contains about 150 satellite images of surface parameters which reveal that from month to month and from one year to another the Earth is changing.

Although the historical record of about three decades of continuous satellite observation is relatively short, these measurements have provided useful insights into the current state of the polar environment and have served as a powerful tool for studying the processes that govern the Earth’s climate system. The advent of even more sophisticated technology, including international ventures like the Global Earth Observation System of all Systems (GEOSS), will speed the progress. The advances in understanding of the Earth’s climate engine, including the crucial role played by the polar oceans, have been tremendous, and people look forward to being able to forecast effectively the state of the planet in the immediate and foreseeable future.

Josefino C. Comiso is a Senior Research Scientist of the Oceans and Ice Branch Division of the NASA Goddard Space Flight Center. His current research interests include: (a) the detection of climate change from historical data; (b) the role of Odden and polynyas in ocean convection and bottom water formation; (c) air-sea-ice interactions and biological processes in the polar regions; (d) radiative transfer modelling studies and satellite algorithms for sea, ice and snow.