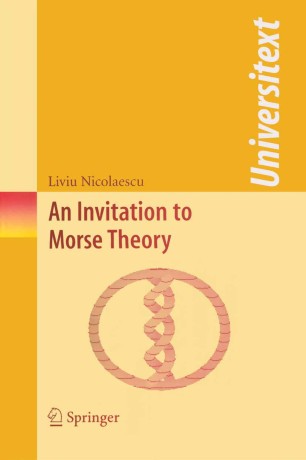 An Invitation to Morse Theory

This is the first textbook to include topics such as Morse-Smale flows, min-max theory, moment maps and equivariant cohomology, and complex Morse theory. The exposition is enhanced with examples, problems, and illustrations, and will be of interest to graduate students as well as researchers. The reader is expected to have some familiarity with cohomology theory and with the differential and integral calculus on smooth manifolds.

Liviu Nicolaescu is Associate Professor of Mathematics at University of Notre Dame.

"Morse theory, a tool within differential topology, strategically studies a given abstract smooth manifold by first imposing on it a nearly arbitrary numerical function, and then cleverly extracting from it purely topological information. … Undergraduates will see that the foundations of this advanced topic build directly on a(n honest) course in multivariable calculus … . Primarily for mathematics students. Summing Up: Recommended. Upper-division undergraduates through professionals." (D. V. Feldman, CHOICE, Vol. 45 (6), February, 2008)

"The book is a nicely written self-contained introduction to Morse theory … . will be useful for mathematicians of various levels, including graduate students and researchers." (Michael Farber, Zentralblatt MATH, Vol. 1131, 2008)

"Nicolaescu’s book starts with the basics of Morse theory over the reals … . The discussion continuously presents some really nice and well chosen applications of the theory, and finally lets the reader see, that the whole theory can go on to complex, where the set of regular values, that is disconnected by nature over the reals, becomes connected. … This book is warmly recommended for interested graduate students and researcher … ." (Árpád Kurusa, Acta Scientiarum Mathematicarum, Vol. 74, 2008)

"Nicolaescu’s book complements previous books on Morse theory by quickly developing the foundations of the subject in terms of gradient-like vector fields and discussing applications not found in other books on Morse theory. … the book is recommended for graduate students and researchers … ." (David E. Hurtubise, Mathematical Reviews, Issue 2009 m)

“This book offers a beautiful self contained introduction to Morse theory. It should be accessible to graduate students familiar with the basics of algebraic topology and differential geometry. … it provides a complete proof of the Picard–Lefschetz formula. The book concludes with a number of exercises and solutions to some of them.” (St. Haller, Monatshefte für Mathematik, Vol. 157 (1), May, 2009)