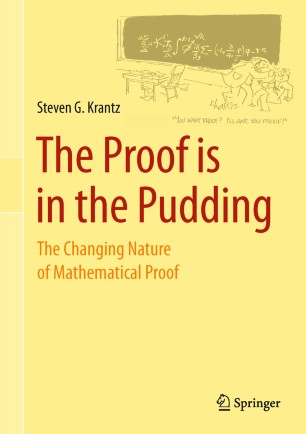 The Proof is in the Pudding

The Changing Nature of Mathematical Proof

Krantz’s book covers the full history and evolution of the proof concept.   The notion of rigorous thinking has evolved over time, and this book documents that development.   It gives examples both of decisive developments in the technique of proof and also of magnificent blunders that taught us about how to think rigorously.  Many historical vignettes illustrate the concepts and acquaint the reader with how mathematicians think and what they care about.

In modern times, strict rules for generating and recording proof have been established.  At the same time, many new vectors and forces have had an influence over the way mathematics is practiced.  Certainly the computer plays a fundamental role in many mathematical investigations.

But there are also fascinating social forces that have affected the way that we now conceive of proof.   Daniel Gorenstein’s program to classify the finite simple groups, Thomas Hales’s  resolution of the Kepler sphere-packing problem, Louis de Branges’s proof of the Bieberbach conjecture, and Thurston’s treatment of the geometrization program are but some examples of mathematical proofs that were generated in ways inconceivable 100 years ago.  Krantz treats all of them---and more---in some detail; he names the players and tells all the secrets.

Many of the proofs treated in this book are described in some detail, with figures and explanatory equations. The reader is given a dose of modern mathematics, and h

ow mathematicians think.   Both the joy and the sorrow of mathematical exploration are communicated dynamically and energetically in this exciting new book.