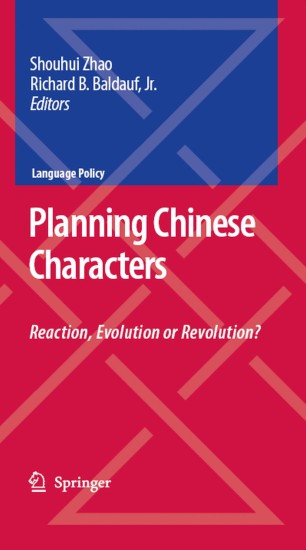 The whole world has been watching the vast changes that are currently occurring in China, but few people are aware that at the same time, to ensure the writing system serves these changes well, Chinese characters have also undergone significant reform. While focusing on current problems, developments and possible solutions, this book also details the major implementation of language planning programs for the modernization of the Chinese writing system that have occurred over the last century.

The volume provides a broad and in-depth analysis of the conflict between one of the world’s oldest surviving script systems and the latest developments in communication technology. Comprehensive in coverage, interdisciplinary in structure, with copious references to assist readers in locating a wide range of resources, this book offers an analytic discussion of character planning that will prove of great value to language policymakers and those who are interested in China/East Asian studies and sinology.

“In this book, Zhao and Baldauf have thoroughly examined the unfolding of the fate of the Chinese characters in the twentieth century within the conceptual framework of language planning. … this book provides a comprehensive picture of China’s script reform and standardization with a tuned focus on the last three decades, a period that missed much-deserved coverage in scholarly work until now. Thus, it is a significant contribution to both English and Chinese publications on modern China’s language planning.” (Minglang Zhou, Chinese Language and Discourse, Vol. 4 (1), 2013)

“This thorough investigation from an international perspective is not only of value to Chinese LP studies, but contributes to widening the spectrum of LP research in the world as well. … the book is carefully constructed; the theoretical investigation is well balanced with readability. The volume is unique in providing a stimulating and critical study of how technology has outstripped political decision-making about language in China … . thus stimulate scholars to pursue further studies.” (Haitao Liu, Language Problems & Language Planning, Vol. 34 (3), 2010)
Buy options