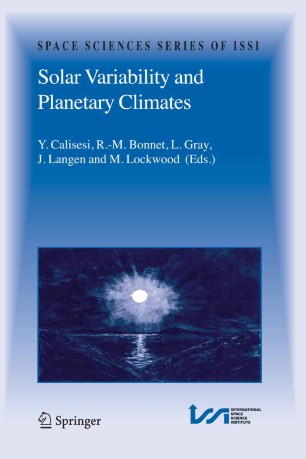 Variations in solar activity, as revealed by variations in the number of sunspots, have been observed since ancient times. To what extent changes in the solar output may affect planetary climates, though, remains today more than ever a subject of controversy. In 2000, the SSSI volume on Solar Variability and Climate reviewed the to-date understanding of the physics of solar variability and of the associated climate response. The present volume on Solar Variability and Planetary Climates provides an overview of recent advances in this field, with particular focus at the Earth's middle and lower atmosphere. The book structure mirrors that of the ISSI workshop held in Bern in June 2005, the collection of invited workshop contributions and of complementary introductory papers synthesizing the current understanding in key research areas such as middle atmospheric processes, stratosphere-troposphere dynamical coupling, tropospheric aerosols chemistry, solar storm influences, solar variability physics, and terrestrial climate analogues.