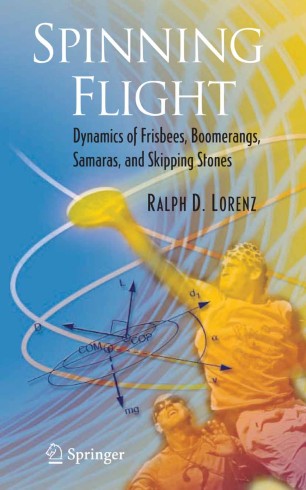 More frisbees are sold each year than baseballs, basketballs, and footballs combined. Yet these familiar flying objects have subtle and clever aerodynamic and gyrodynamic properties which are only recently being documented by wind tunnel and other studies. In common with other rotating bodies discussed in this readily accessible book, they are typically not treated in textbooks of aeronautics and the literature is scattered in a variety of places.

This book develops the theme of disc-wings and spinning aerospace vehicles in parallel. Many readers will have enjoyed these vehicles and their dynamics in recreational settings, so this book will be of wide interest. In addition to spinning objects of various shapes, several exotic manned aircraft with disc platforms have been proposed and prototypes built - these include a Nazi ‘secret weapon’ and the De Havilland Avrocar, also discussed in the book.

Boomerangs represent another category of spinning aerodynamic body whose behavior can only be understood by coupling aerodynamics with gyrodynamics. The narrative, supported by equations and graphs, explains how the shape and throw of a boomerang relates to its trajectory. The natural world presents still other examples, namely the samaras or ‘seed-wings’ of many tree species, which autorotate during their descent, like a helicopter whose engine has failed.

In short, this book discusses a range of familiar, connected, but largely undeveloped, topics in an accessible, but complete manner. ‘Toys’ familiar to all of us are covered as well as high-tech products of the aerospace industry. Spinning Flight includes not only the latest published results but also describes Lorenz’s own experiments with ‘how-to’ instructions on how readers can do their own experiments.