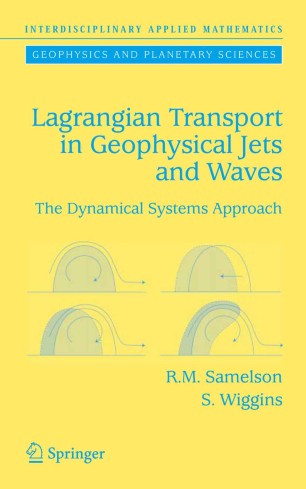 This book provides an accessible introduction to a new set of methods for the analysis of Lagrangian motion in geophysical flows. These methods were originally developed in the abstract mathematical setting of dynamical systems theory, through a geometric approach to differential equations. Despite the recent developments in this field and the existence of a substantial body of work on geophysical fluid problems in the dynamical systems and geophysical literature, this is the first introductory text that presents these methods in the context of geophysical fluid flow. The book is organized into seven chapters; the first introduces the geophysical context and the mathematical models of geophysical fluid flow that are explored in subsequent chapters. The second and third cover the simplest case of steady flow, develop basic mathematical concepts and definitions, and touch on some important topics from the classical theory of Hamiltonian systems. The fundamental elements and methods of Lagrangian transport analysis in time-dependent flows that are the main subject of the book are described in the fourth, fifth, and sixth chapters. The seventh chapter gives a brief survey of some of the rapidly evolving research in geophysical fluid dynamics that makes use of this new approach. Related supplementary material, including a glossary and an introduction to numerical methods, is given in the appendices.

This book will prove useful to graduate students, research scientists, and educators in any branch of geophysical fluid science in which the motion and transport of fluid, and of materials carried by the fluid, is of interest. It will also prove interesting and useful to the applied mathematicians who seek an introduction to an intriguing and rapidly developing area of geophysical fluid dynamics. The book was jointly authored by a geophysical fluid dynamicist, Roger M. Samelson of the College of Oceanic and Atmospheric Sciences at Oregon State University, USA and an applied mathematician, Stephen Wiggins of the School of Mathematics, University of Bristol, UK.

"A strong understanding of Lagrangian approaches to the transport and stirring of fluid often benefits from mental visualization. One must picture diverging fluid and evolving material curves that deform and tangle about each other. A successful introduction to this subject should facilitate this description, and this fine monograph by Roger Samelson and Steve Wiggins does so effectively. The book is written primarily for students and researchers in the geosciences." (Larry Pratt, SIAM Review, Vol. 49 (4), 2007)

"The purpose of the monograph is to explore some of the new insights into Lagrangian motion in geophysical flows followed from such approach and to present an accessible introduction to the basic elements of some of these methods. … The monograph will be useful for applied mathematicians, especially working in geophysical fluid dynamics." (Boris V. Loginov, Zentralblatt MATH, Vol. 1132 (10), 2008)