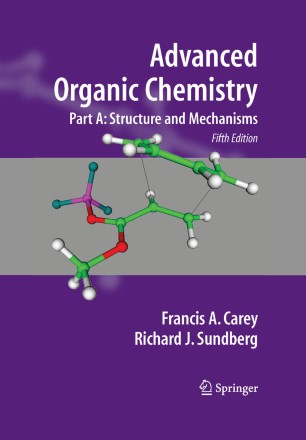 Part A: Structure and Mechanisms

Since its original appearance in 1977, Advanced Organic Chemistry has maintained its place as the premier textbook in the field, offering broad coverage of the structure, reactivity and synthesis of organic compounds. As in the earlier editions, the text contains extensive references to both the primary and review literature and provides examples of data and reactions that illustrate and document the generalizations. While the text assumes completion of an introductory course in organic chemistry, it reviews the fundamental concepts for each topic that is discussed.

The two-part fifth edition has been substantially revised and reorganized for greater clarity. Part A begins with the fundamental concepts of structure and stereochemistry, and the thermodynamic and kinetic aspects of reactivity. Major reaction types covered include nucleophilic substitution, addition reactions, carbanion and carbonyl chemistry, aromatic substitution, pericyclic reactions, radical reactions, and photochemistry.

Advanced Organic Chemistry Part A provides a close look at the structural concepts and mechanistic patterns that are fundamental to organic chemistry. It relates those mechanistic patterns, including relative reactivity and stereochemistry, to underlying structural factors. Understanding these concepts and relationships will allow students to recognize the cohesive patterns of reactivity in organic chemistry. Part A: Structure and Mechanism and Part B: Reaction and Synthesis - taken together - are intended to provide the advanced undergraduate or beginning graduate student in chemistry with a foundation to comprehend and use the research literature in organic chemistry