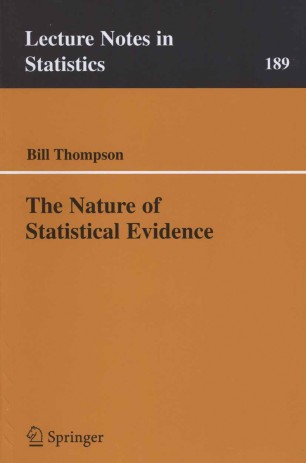 The Nature of Statistical Evidence

The purpose of this book is to discuss whether statistical methods make sense. That is a fair question, at the heart of the statistician-client relationship, but put so boldly it may arouse anger. The many books entitled something like Foundations of Statistics avoid controversy by merely describing the various methods without explaining why certain conclusions may be drawn from certain data. But we statisticians need a better answer then just shouting a little louder. To avoid a duel, we prejudge the issue and ask the narrower question: "In what sense do statistical methods provide scientific evidence?"

The present volume begins the task of providing interpretations and explanations of several theories of statistical evidence. It should be relevant to anyone interested in the logic of experimental science. Have we achieved a true Foundation of Statistics? We have made the link with one widely accepted view of science and we have explained the senses in which Bayesian statistics and p-values allow us to draw conclusions.

Bill Thompson is Professor emeritus of Statistics at the University of Missouri-Columbia. He has had practical affiliations with the National Bureau of Standards, E.I. Dupont, the U.S. Army Air Defense Board, and Oak Ridge National Laboratories. He is a fellow of the American Statistical Association and has served as associate editor of the journal of that society. He has authored the book Applied Probability.