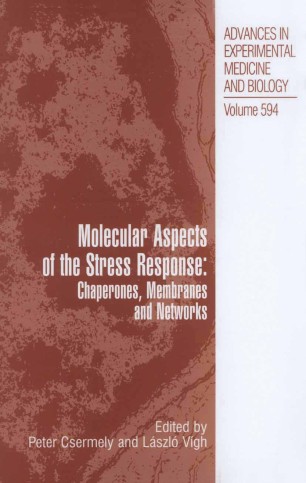 Molecular Aspects of the Stress Response: Chaperones, Membranes and Networks

Part of the Advances in Experimental Medicine and Biology book series (AEMB, volume 594)

We are extremely happy to present the reader this book containing a summary of a well-known research field, the phenomenon of cellular stress defense from two new angles: networks and membranes. The volume starts with an introduction to the concept of molecular chaperones in their original sense: R. John Ellis, the founder of the chaperone concept describes chaperones as mediators of correct assembly and/or misassembly of other macromolecular complexes. This sets the tone of the book, where later chapters give detailed examples of the richness of chaperone ac­ tion by hundreds of other proteins and membrane structures. The reader will learn the role of chaperone classes such as Hsp27 or Hsp90, the action of highly organized chaperone networks in various cellular compartments such as the ER or mitochondrial/ER networks as well as the molecular details of the signaling mechanisms leading to chaperone induction during stress. Various special stress defense mechanisms against oxidative stress or dryness will also be covered. Membranes comprise a surprising mixture of stability and dynamics in the cell. Their role in the regulation of the stress response has been accepted only slowly in the field. Two chapters summarize this important aspect of the stress response showing the importance of membrane hyperstructures, lipid species composition, protein/ membrane interactions and cold adaptation.