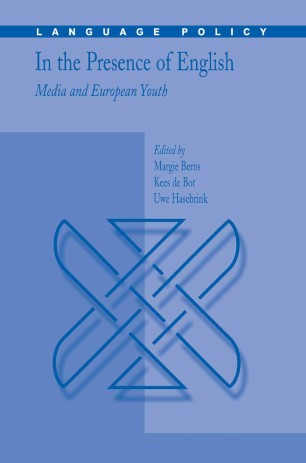 In the Presence of English: Media and European Youth

The starting point for this comparative study on the role of English within the media worlds of European youth is the recognition of the increasing importance of communication with peoples from other cultures and countries.

Within the European Union (EU), English has a special role in this regard. While EU policy promotes all languages spoken in member states, and although English is not the most frequently spoken first language, it is the language two Europeans are most likely to use to make themselves understood. This lingua franca phenomenon occurs not only in the fields of science and technology, but also in business and everyday, personal interactions. The media, which plays an important role in intercultural communication, serves as a cultural forum, and both creates culture and transmits representations of other cultures. Its offerings are often highly internationalized, especially in pop culture, films, TV series, and variety shows, which exercise great influence on cultural and linguistic issues in the multilingual, multicultural EU.

The primary goals of "In the Presence of English: Media and European Youth" are to gain insight into the roles of English in and for Europe; to contribute to discussions of the possibilities of transnational media offerings; to better understand the influence of media in foreign language acquisition and of its role in promoting cross cultural understanding across European cultures; and to better understand the role of English media in the construction of the world view of European youth. The research presented on the relationship of media use to language proficiency has relevance to how schools react to and take advantage of media influences on English acquisition. It also has implications for approaches to language policy and planning issues relating to the present and future role of English in the EU, and the re-evaluation of the presence and prevalence of English in the media both as a threat to the notion of a European identity and as a contributing factor in the creation of such an identity.

Researchers, scholars, practitioners, and students of such fields as second language pedagogy and acquisition, language policy, media and communication, and sociolinguistics as well as educational and social psychology will all have an interest in "In the Presence of English: Media and European Youth".

Margie Berns is Professor of English as a Second Language and Director of the English as a Second Language Program. She also holds a faculty appointment in Language & Literacy in the School of Education. She has had guest professorships at the University of Las Palmas, Canary Islands, Spain; University of Nijmegen, the Netherlands; and Iowa State University. Her areas of specialization are languages of wider communication, language policy & planning, and second language teaching. Her current research focus is the sociolinguistic dimensions of English in Europe and South America. Her publications include articles and reviews appearing in World Englishes, International Journal of Applied Linguistics, and English Today. Her books include Contexts of Competence: Social and Cultural Considerations in Communicative Language Teaching (Plenum, 1990), Initiatives in Communicative Language Teaching (Addison-Wesley, 1984), and Initiatives in Communicative Language Teaching II (Addison Wesley, 1987. She regularly teaches courses in sociolinguistics and world Englishes. A member of the International Association for World Englishes (IAWE), International TESOL, and the American Association for Applied Linguistics (AAAL), she has served IAWE as Conference & Program Chair and, currently, President; TESOL as Editorial Board Member; and AAAL as Conference & Program Chair, Member-at-Large, and as President.

Kees de Bot (PhD University of Nijmegen 1992) is Chair of Applied Linguistics and Director of the School of Language, Communication and Information science at the University of Nijmegen. His main current research interests are the psycholinguistics of bilingualism, language attrition and language loss, and language planning. He is interested in the role of English as a lingua franca in the European setting and particularly in the thread of English to mid-sized national languages like Dutch and the Nordic languges.

Dr. Uwe Hasebrink is Executive Manager and a Director of the Hans-Bredow-Institute for Radio and Television Institute for Media Research at the University of Hamburg and professor of Communications/Media Studies, University of Hamburg. Since his move to the Hans Bredow Institute Uwe Hasebrink has been responsible for numerous research projects, publications and conferences. Those activities were carried out in cooperation with, amongst others, public and private broadcasters in Germany and Switzerland, the German Ministries for Education and Science and for Inner Affairs, the European Commission, the European Broadcasting Union, the European Institute for the Media, the supervisory bodies for private broadcasting (Landesmedienanstalten). Since 1997 he is a consultant of the Strategic Information Service (SIS) of the European Broadcasting Union (EBU). His main research interests and publications have been in the following areas: Individual patterns of media use, development of media use in Europe, the need for and the feasibility of a European Educational Television, programme quality and the public service function of broadcasting. Besides that, as a member of the Hans Bredow Institute, he is involved in the full range of activities of this institute. These include the edition of the research journal Rundfunk und Fernsehen (Radio and Television) and, every two years, the Internationales Handbuch für Hörfunk und Fernsehen, a comprehensive overview of the world's media systems. Furthermore, these activities include research projects in other media-related areas (especially media law and economy), conferences and workshops as well as service functions towards broadcasters, politicians, and the public.