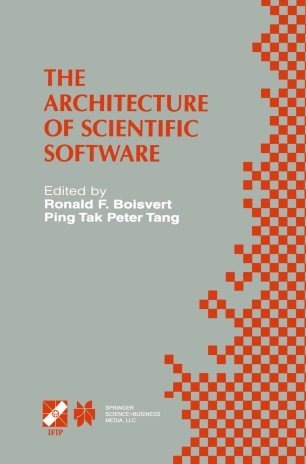 The Architecture of Scientific Software

Scientific applications involve very large computations that strain the resources of whatever computers are available. Such computations implement sophisticated mathematics, require deep scientific knowledge, depend on subtle interplay of different approximations, and may be subject to instabilities and sensitivity to external input. Software able to succeed in this domain invariably embeds significant domain knowledge that should be tapped for future use. Unfortunately, most existing scientific software is designed in an ad hoc way, resulting in monolithic codes understood by only a few developers.
Software architecture refers to the way software is structured to promote objectives such as reusability, maintainability, extensibility, and feasibility of independent implementation. Such issues have become increasingly important in the scientific domain, as software gets larger and more complex, constructed by teams of people, and evolved over decades. In the context of scientific computation, the challenge facing mathematical software practitioners is to design, develop, and supply computational components which deliver these objectives when embedded in end-user application codes.
The Architecture of Scientific Software addresses emerging methodologies and tools for the rational design of scientific software, including component integration frameworks, network-based computing, formal methods of abstraction, application programmer interface design, and the role of object-oriented languages.
This book comprises the proceedings of the International Federation for Information Processing (IFIP) Conference on the Architecture of Scientific Software, which was held in Ottawa, Canada, in October 2000. It will prove invaluable reading for developers of scientific software, as well as for researchers in computational sciences and engineering.