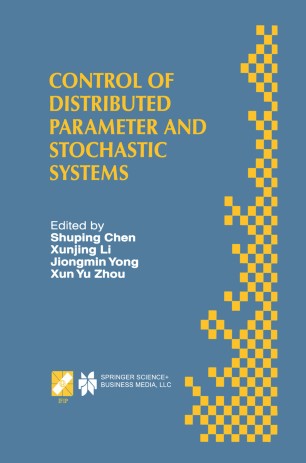 In the mathematical treatment of many problems which arise in physics, economics, engineering, management, etc., the researcher frequently faces two major difficulties: infinite dimensionality and randomness of the evolution process. Infinite dimensionality occurs when the evolution in time of a process is accompanied by a space-like dependence; for example, spatial distribution of the temperature for a heat-conductor, spatial dependence of the time-varying displacement of a membrane subject to external forces, etc. Randomness is intrinsic to the mathematical formulation of many phenomena, such as fluctuation in the stock market, or noise in communication networks. Control theory of distributed parameter systems and stochastic systems focuses on physical phenomena which are governed by partial differential equations, delay-differential equations, integral differential equations, etc., and stochastic differential equations of various types. This has been a fertile field of research with over 40 years of history, which continues to be very active under the thrust of new emerging applications.
Among the subjects covered are: .
It is essential reading for applied mathematicians, control theorists, economic/financial analysts and engineers.