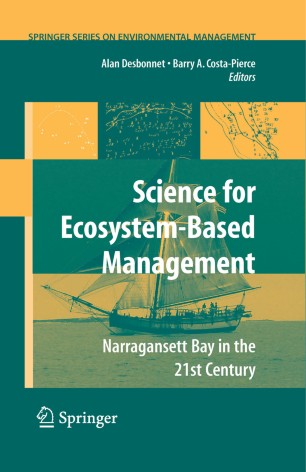 Narragansett Bay in the 21st Century

In the United States, approximately two thirds of coastal rivers and bays are moderately to severely degraded by nutrient pollution. Nonetheless, the problem of nutrient pollution is still debated. Rhode Island is in the formative stages of undertaking what many are calling a "grand experiment" in reducing nutrient input to the Narragansett Bay ecosystem, one of the best-studied estuaries in the world. "Science of Ecosystem-based Management: Narragansett Bay in the 21st Century" sets the stage for conducting this experiment by compiling, within one volume, the best available science from preeminent experts on the bay ecosystem. Each chapter elucidates what is known about the various elements that make up the ecosystem including its biology, ecology, chemistry, and physical dynamics, delving into historical data and trends, current research findings and consideration of how patterns might change given major reductions in nutrient input to the ecosystem.

While of obvious and great value to those directly engaged with Narragansett Bay, this volume provides useful examples of other places where nutrient reduction protocols are being considered or should be considered. This volume will be of interest and importance to researchers, agency personnel, and natural resource managers who are contemplating nutrient reductions as a way of moving towards sustainability in the use of coastal resources.

"This book, part of the ‘Springer Series on Environmental Management,’ is based on a 2004 symposium of the same name. Desbonnet and Costa-Pierce … bring together all aspects of ecosystem-based management practices to improve environmental quality. … contains clear tables and figures that help to illustrate points in the text. … The book contains many references related to the field site and to best practices in ecosystem management; it will be especially valuable … . Summing Up: Recommended. Graduate students through professionals." (M. E. Lenczewski, CHOICE, Vol. 45 (11), August, 2008)