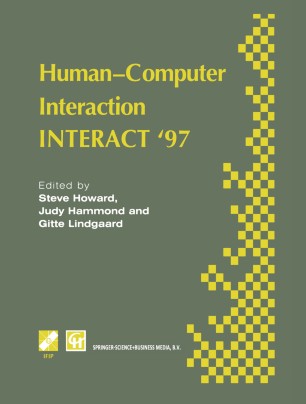 The theme of the 1997 INTERACT conference, 'Discovering New Worlds ofHCI', signals major changes that are taking place with the expansion of new technologies into fresh areas of work and leisure throughout the world and new pervasive, powerful systems based on multimedia and the internet. HCI has a vital role to play in these new worlds, to ensure that people using the new technologies are empowered rather than subjugated to the technology that they increasingly have to use. In addition, outcomes from HCI research studies over the past 20 years are now finding their way into many organisations and helping to improve and enhance work practices. These factors have strongly influenced the INTERACT'97 Committee when creating the conference programme, with the result that, besides the more traditional HCI research and education focus found in previous INTERACT conferences, one strand of the 1997 conference has been devoted to industry and another to multimedia. The growth in the IFIP TCI3 committee itself reflects the expansion ofHCI into new worlds. Membership oflFIP TC13 has risen to now include representatives of 24 IFIP member country societies from many parts of the world. In 1997, IFIP TCl3 breaks new ground by holding its sixth INTERACT conference in the Asia-Pacific region. This is a significant departure from previous INTERACT conferences, that were all held in Europe, and is especially important for the Asia-Pacific region, as HCI expands beyond its traditional base.