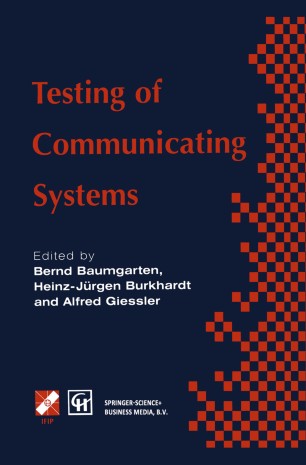 This volume contains the proceedings of the IFIP WG 6. 1 International Workshop on Testing of Communicating Systems (lWTCS'96), held in Darmstadt, Germany, on September 9 through II, 1996, continuing the IFIP WG 6. 1 series of International Workshops on Protocol Test Systems (IWPTS). In this series of working conferences, held annually since 1988, many valuable contributions have been presented with an emphasis both on the OSI conformance testing methodology and framework as well as the standardization effort on formal methods in conformance testing. While there are stilI open issues and divergencies between theory and practice in these fields, the scope of the series started expanding to related fields of growing practical relevance, for example to testing with regard to the B-ISDN protocol reference model, in particular ATM, the ODP reference model, and the Internet protocol suite, as well as to interoperability testing and performance testing. To reflect the extended scope, the program committee agreed on a new name for this series of working conferences, to be applied the first time to the 1996 conference. However, in order to emphasize the tradition of IWPTS, the numbering of this series was continued, such that IWTCS'96 is counted as the 9th International Workshop on Testing of Communicating Systems. As in the years before, the workshop aims at bringing together researchers and practi­ tioners, furthering the exchange of views, and correlating the work of both sides.