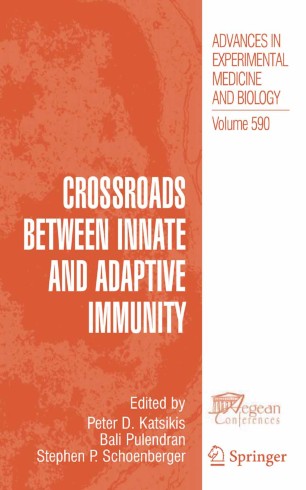 Crossroads between Innate and Adaptive Immunity

Part of the Advances in Experimental Medicine and Biology book series (AEMB, volume 590)

This compilation presents minireviews derived from work presented at the - gean Conference: “First Crossroads between Innate and Adaptive Immunity,” which occurred October 9–14, 2005 at the Hilton Conference Center on the - land of Rhodes, Greece. The conference included sessions dedicated to host r- ognition of and response to pathogens, innate immune networks, antigen pres- tation, and adaptive immune responses, each headlined by a leading scientist at the forefront of that field. The intimate networking and interaction of dendritic cells, T cells, B cells, NK cells, NK-T cells, and complement during the host response to pathogens and tumors are only now starting to be elucidated. The respective fields that focus on these immune cells and molecules tend to exist in parallel worlds, with minimum exchange of information and ideas. The goal of this conference was to initiate crosstalk between these immunological fields, and to promote and facilitate discussion on the interactions between the innate - mune response and the adaptive immune response, and ultimately breed colla- ration between these areas of study. The “First Crossroads between Innate and Adaptive Immunity” Aegean Conference succeeded in bringing together and connecting scientists and experts from around the world to address critical areas of innate and adaptive immunity — something necessary for the development of more efficient scientific exchange and crosspollination between these fields.